Home travel Along The Trail of a Krakatoa Eruption

Along The Trail of a Krakatoa Eruption

On August 27, 1883 a hitherto unknown mountain o¤ the west  coast of Java blasted itself to smithereens in an explosion that – literally and psychologically – rocked the world. Jack Orchard spends a night on Krakatoa. Three large waves pass under the bow of our little fishing boat. Under normal conditions I might not even have noticed them, but here on the Sunda Strait I feel strangely attuned to this sort of instability.

After all, we’re just a couple of kilometres from one of the most famously unpredictable patches of real estate in the world. I am aware that these waves are just mild reminders of the colossal tectonic forces that are churning below us on the seabed. 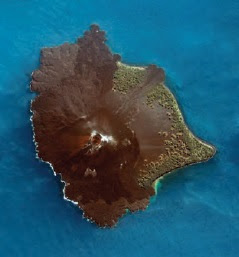 There are a few places on our planet that seem to exist solely to remind us just how flimsy the crust of rock under our feet really is. Krakatoa is probably the most mysteriously eerie of all these places.

Once upon a time, there was a large forest-covered mountain o‘ the west coast of Java.  It was known to sailors as a good harbour,  and even Captain Cook stopped here to re-provision at the fresh springs. Then on August 27, 1883 the entire mountain blew itself  literally o‘ the face of the Earth.

The sound of ‘heavy artillery’ was reported from as far away as Sri Lanka and Alice Springs, and the ensuing tsunami spread out from this narrow strait at a speed of 650km/h.  It crossed the planet and was felt even in the English Channel.

Some 18 cubic kilometres  of dust shot to three times the height of Everest and circled the world for the next seven years. There are scholars who claim  that the dramatically moody school of art of that period was influenced by the apocalyptic sunsets of those ‘summerless years’.

It’s no coincidence, they say, that books like Bram Stoker’s Dracula were written in this dark, gloomy period. The mountain was known locally as Krakatau (or Rakata) but, due  to an early misprint in The Times newspaper, the world’s most notorious volcano became known internationally as ‘Krakatoa’.

Our little boat passes under the forested  spire of what is now called Rakata Island,  and we’re now motoring across the crater where the great Krakatau mountain once loomed.

Today, three small islands curve around the crater. The water is clear and,  for the moment, very still. I wonder if this   is how it looked the day before the mountain blew its top. Apparently there had been no warning at all: a minor Dutch administrator had reported that some ‘crazy fishermen’ had seen ‘pre-cooked fish’ floating on the surface.

Nobody was prepared for the 37-metre tsunami that roared across the shores of Java and Sumatra killing 36,417 people. Even today it’s a haunting experience to walk from Carita Beach across the acres of plantations and paddies and up the steep track to the point where the wave finally lost its power.

From up on the bow of the boat my guide Samsul shouts something to the skipper.  The helm sweeps around, and we head for  a patch of white sand, fringed by a few spindly palms.

Most of the island is naked, and it’s clear that vegetation has little chance to grow here between periodic storms of fire and ash. It’s almost dusk when I jump o‘ the boat onto one of the youngest islands on our planet.

This new Krakatau first raised its head above the surface of the sea on August 12, 1930. Apparently it had raised a fiery, craggy head several times before – like a dragon hatchling – but the stormy seas had always bashed it back down. The local fishermen called this new volcano Anak Krakatau (Krakatoa’s Son). This is the smoking gun that is all that remains of the fearsome mountain.

As we light a campfire to cook our fresh fish  I have the absurd feeling that we’re lighting  a fuse above one of the world’s biggest powder-kegs, and before I sleep I imagine I can feel the distant rumblings through

The mountain was known locally as Krakatau but, due to an early misprint in The Times newspaper, the world’s most notorious volcano became known internationally as ‘Krakatoa’.

the sand under my back. But the gentle lapping of the waves lulls me to sleep. It seems like only a moment later when Samsul is quietly shaking me awake.

It’s still dark and I can see the cone of the volcano only as  a shadow against that glittering canopy of stars. In the dim torchlight I can see the tracks of a huge monitor lizard that came to scavenge the remains of our supper.

We leave the boat crew peacefully sleeping and head o‘ for a dawn view from the volcano’s summit.  At the bottom of the slope we  pass the seismic receptor that  is sending readings back to the Krakatau Volcano Observatory  on the mainland. I’d visited the observatory and seen printouts  from the previous few days:  there was rarely a spell of a few minutes when Krakatoa’s Son  was not wriggling and writhing,  like an angry baby building up  for a monumental tantrum.

Anak Krakatau is only 500 metres tall, but on the loose, sliding scree you sometimes seem to slide two steps back for every three you take forward: “Every time I climb this volcano it seems a bit harder,” says Samsul, “…but since it’s growing  by almost two metres a year I guess that’s logical.”

About 40 minutes later we  feel nuggets of sulphur crystals crackling under our boots and have to cover our faces against the noxious clouds of smoke that swirl around, seemingly trying to keep  us away. Soon we’re on the rim, looking into the unfathomable depths of what one Victorian  writer called ‘the gates of hell’ .

Many of the rocks are too hot to touch and I wonder how recently they have been blasted out of the bowels of the Earth. Brutal as it is, the summit of an active volcano  can also be a place of unexpected beauty. There are flowerbeds of primrose-yellow sulphur and boulders that are adorned with  gem-like golden crystals.

We stay until the poisonous air becomes overpowering and then start back down the slope. As we walk I realise that I’ve almost been walking on tiptoes all this time.

I find myself hoping that Krakatoa’s baby will continue to sleep soundly for at least a few hours longer.