Metabolic disorders that are associated with high blood sugar and glucose are collectively known as diabetes mellitus. Reasons for high blood sugar level can be too little insulin produced by the body or the body cells that cannot respond to insulin properly or it can be a mixture of both.

What Insulin Does to Your Body

Insulin is released into the bloodstream when blood glucose is high such as, after a meal, it signals to cell so taking glucose for energy or storage. 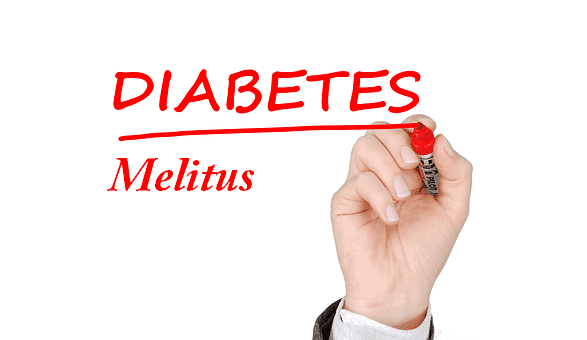 It also prevents more glucose from being synthesized or released from storage. Therefore the overall effective insulin is to decrease blood glucose levels. Diabetes mellitus or simply diabetes occurs when this insulin signalling pathway is broken without proper functioning of insulin blood glucose levels skyrocket.

Despite glucose being a very important source of fuel for the body too much of it in the blood is extremely damaging. In the short term, high blood glucose leads to the hallmark symptom of diabetes, glucose Iria or glucose in the urine.

In fact, term Mellitus means honey in Latin to reflect the symptom of sweet tasting urine. how does this occur at the kidneys glucose is filtered out of the blood and into the urine. Is later transported back into the blood since the body did not want to lose this valuable source of fuel.

These conditions and the best symptoms of diabetes mellitus. Initially, cells lack sufficient fuel to sustain but prolonged periods of high blood sugar results in organ failure in which major organs such as heart kidneys eyes nerve cells and blood vessel can be damaged or fail to function eventually. 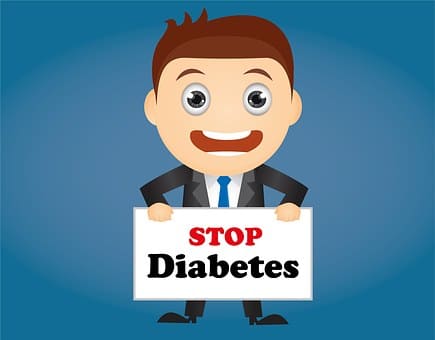 When there is too much glucose in the blood more of it is filtered into the urine. even at their maximum transport rate, the proteins cannot transport all of the glucose out of the urine leading to glucose area. This causes excess urination since the presence of glucose in the urine draws in more water by osmosis, excess thirst and dehydration are a consequence of this since more water is lost through urine.

In addition, since cells cannot take up glucose for energy without insulin the body perceives itself to be starving leading to both increased appetite and fatigue. In the long term, high blood glucose damages blood vessels in the eyes and kidneys. which is why diabetes is the leading cause of adult blindness and kidney failure. 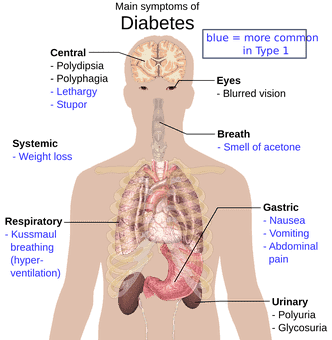 High blood glucose also damages nerves leading to loss of sensation in the feet and hands. When those areas get injured such as from cuts or from blood vessel damage the person does not notice the injury leading to infections and necrosis that eventually require amputation.

Most importantly the damage to blood vessels in the heart and brain can lead to high blood pressure, stroke, and heart attacks, which account for most of the deaths in diabetic patients. Most diabetes cases can be divided into two types. based on how the insulin signalling pathway is malfunctioning.

Type 1 diabetes accounts for around 10 per cent of diabetes cases while type 2 makes up most of the remainder. Type 1 diabetes is caused by a lack of insulin production. in the pancreas, there are special clusters of endocrine called the islets of Langerhans.

One type of endocrine cell in these eyelids is the beta cell. which produce and release insulin, in type 1 diabetes the beta cells are destroyed by the immune system. Therefore the body can no longer produce insulin and blood glucose levels rise uncontrollably, leading to the symptoms mentioned earlier.

Scientists believe both genetic mutations and environmental factors such as infections may play a role in triggering this autoimmune attack. 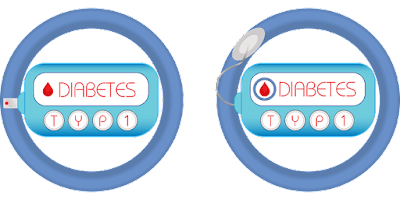 An additional symptom of type 1 diabetes is rapid weight loss as fat cells or adipocytes begin to break down fats into another type of energy molecule known as ketone bodies. Large amounts of these ketone bodies are released into the blood, which can be taken up by other cells as an alternative source of fuel.

However, ketone bodies are slightly acidic molecules so excessive amounts of these molecules can acidify the blood. This is known as diabetic ketoacidosis which is a life-threatening condition if untreated.

However, when most people think of diabetes they are probably imagining the more common type 2 diabetes associated with obesity, high sugar and fat, diet and a lack of exercise. These three lifestyle factors, as well as genetic factors, dramatically increase the risk of developing type 2 diabetes.

Unlike type 1 diabetics type 2 diabetics continue to produce insulin. However their cells have become resistant to insulin meaning that more insulin is required to achieve the same effect of lowering blood glucose, to compensate for insulin in effectiveness beta cells will produce even more insulin.

However when insulin resistance becomes so severe that the insulin required by the body exceeds the maximum amount of insulin produced by beta cells symptoms of high blood glucose begin to appear. Weight loss and diabetic ketoacidosis from fat breakdown also occur in some cases of type 2 diabetes.

However, factors such as high insulin levels from excessive sugar consumption and fat around the liver and pancreas are being investigated as possible causes of insulin resistance. These drugs can decrease glucose absorption in the intestines after a meal decrease synthesis of new glucose or increase insulin sensitivity which leads to more glucose uptake by cells.

For example, the drug metformin is the first-line treatment type 2 diabetes because it can activate certain metabolic pathways to both decreases glucose synthesis and increase glucose uptake by cells, by increasing insulin sensitivity. 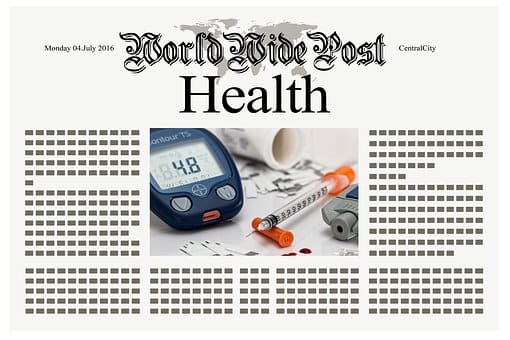 Currently, it is estimated that 500 million adults which is around 10% of the worldwide adult population is living with diabetes. although this number is expected to increase in the future.

If more people become aware of and avoid the lifestyle choices associated with diabetes we can slow down or even reverse this trend. It is also important to note that diabetes is an extremely complex and not fully understood disease, that scientists are still finding new information about every day.